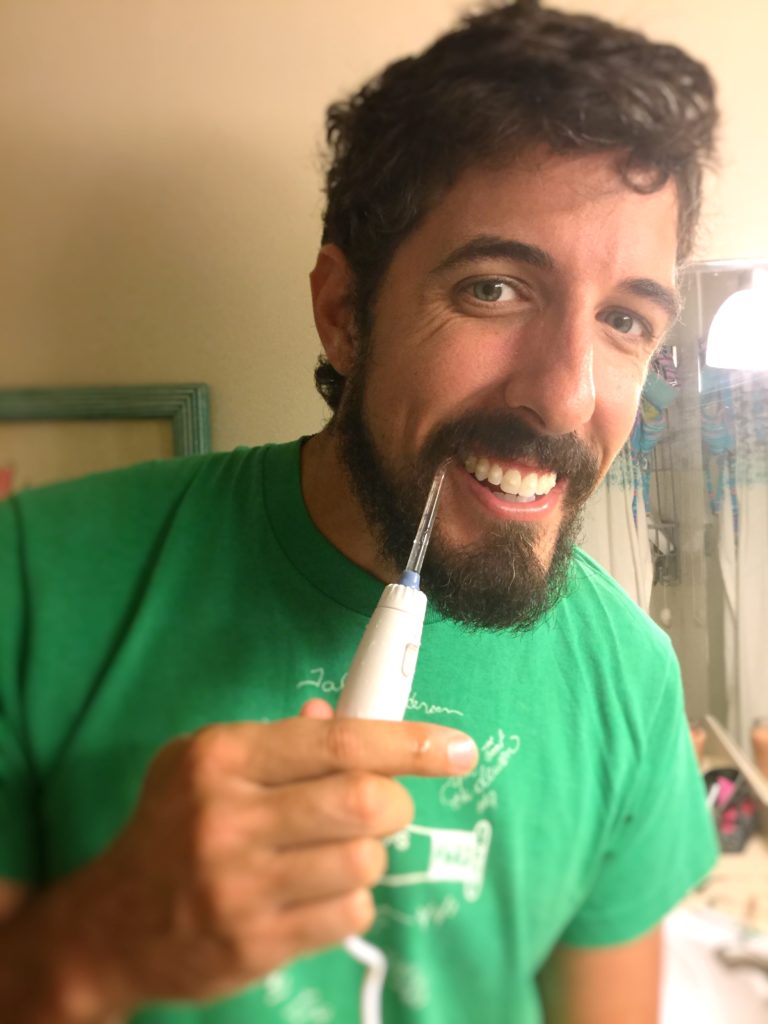 Babylonia. 3500 BC. The earliest chew sticks were first being used- the predecessors to THE MODERN TOOTHBRUSH.

The first bristle toothbrush appeared in China during the Tang dynasty.

The next evolution of personal tooth care didn’t appear until a thousand years later when dentist Levi Parmley advocated using waxed silk thread to floss out “that irritating matter which no brush can remove, and which is the real source of disease.”

Now we jump to 2017, in a San Diego apartment complex. Jason and I have purchased a Waterpik flosser, ushering in a new era of dental care. But is it effective? Does it work? Will we even use it?!?

Answer: YES. Flossing is fun again, kids! Here’s the thing: Jason and I have a hard time flossing. It’s boring and makes your fingers smell (EWWWWW). But the Waterpik flosser, with its changeable heads and water pressure options, makes it a novel experience. I still have flossers in my car for when we’re out and about, but I’m excited to use my Waterpik every evening. The first night we used it, we were surprised at how powerful and effective it was. It definitely powerfully sprayed water all over our bathroom mirror before we took the time to read the directions 🙂 I liked how it felt like a massage on my gums, and how it gets the back molars. Jason likes how fast it is to use. During the maiden voyage, colorful chunks of food fell out of Jason’s teeth- again, EWWWW. Yuck-o muck-o trapped in his Invisalign brackets.

Of course, I had to check in with pops (Dr. Medina to most of you 🙂 ) to see what he thought of these modern flossers.

“As a dentist, I have been taught that the golden standard is 18 inches of floss, once a day. And to brush twice a day.  There are many situations where traditional flossing is not an option, like when a patient has braces. In that case a water pick is ideal, in blasting out the grunge from between the teeth. “ Dr. Medina

Don’t have your invisalign yet? Not to worry! August 17 is Invisalign Day at Seasons of Smiles– call Dr. Medina today to book your appointment.

Kandice Medina Bird is an Emergency Room nurse who is currently doing travel jobs around California. She got her associates degree in Texas and went back for her Bachelors degree in Tennessee. She enjoys reading, playing disc golf, and beating her handsome husband Jason at fantasy football. She thanks her father Dr. Medina on a daily basis for her happy smile.