Linda Champeon – Isn’t there Something We Can Do?

Wordpress Tag Keywords: Jesus - The One and Only, Linda Champeon 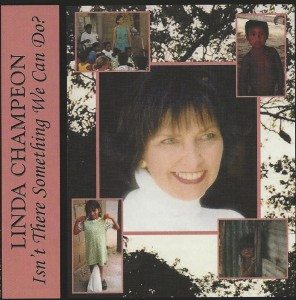 Linda Champeon – Isn’t There Something We Can Do?

It’s December 2012, and ’tis the Gift giving season!  It’s always such a delight when friends bring gifts to us – we feel honored and humbled.  Today, Linda brought in a CD she recorded, and we thought it was such a neat CD, and I asked Linda if we could share one of her songs on the internet and she graciously said yes!

Now, which one to choose to post here; it was a dilemma.  I chose the first track, Jesus, The One and Only.

The CD sounds so much better than the MP3 copy, if you wish to have a CD of your very own, you can obtain one from Linda for $5.00, she can be reached at champeon [at] gmail [dot] com.

From the Album Jacket, I learned that …

Don and Linda Chmpeon were both saved in 1977. Two years later they were off to Bible College and Seminary and have been serving the Lord “full time” ever since. In 1986, Don became the pastor of a Baptist church on the coast of Maine. After 13 years in that ministry, they both felt God’s calling to a new work, this time in Venezuela, South America, where they currently minister as missionaries. They work with street children in the Foundation for A New Beginning which Linda founded in 1977 and minister in Christ for All Nations Baptist Church founded by Don in 2000.

Their greatest desire is to see that all peoples and all nations hear and know that Christ is the only Redeemer and that God is the only God. May this recording be a blessing to you and may you continue to praise God’s holy name. Psalm 67

Tucked inside the Album Jacket, I also learned that …

Fifty-three years ago a slate miner, farmer, and father of ten bought a small insurance policy . . .

While praying for the money that would be necessary to produce this CD, I asked God to let the funds come to us in such a way that I would know that they were solely for this project. As time drew nearer to the recording date, I began to doubt that we should continue. Through a call from my sister, God Confirmed His desire for me to see it through.

My sister told me of some unclaimed monies in my name, and it was exactly what was needed to see the project through to completion.

God used my earthly father’s investment in an insurance policy at my birth, to pay for this CD. My heart is overwhelmed that my father, who died in 1980, has become so much a part of the project. Only my Heavenly Father could have orchestrated these special circumstances. Praise His Name.