Ringing in the Seasons 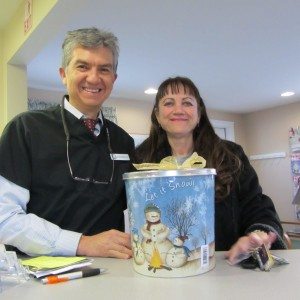 We at Seasons of Smiles Dental want to thank Leigh Smith for all you and Ron do for our community. Thank you for inviting us to the Seventh Annual Christmas-By-The-Sea Handbell Concert, Ringing in the Season Concert held at the First Congregational Church of Camden on Saturday, December 1, 2012.

It was beautiful.  Not only am I sorry that I was late to the concert and missed the first few minutes of the concert, but I’m even more sorry that I got caught. I promise next year, I’ll be there on time. I am told that the concert is always held on the first Saturday in December and that it is always the same weekend as Camden’s annual Christmas by the Sea.  I have it marked on my Calendar, December 7, 2013.  I hope to see you there.

I would also thank you for the goodies that you brought to the office. It was sweet of you, thank-you!!!

This year, the wonderful ringers represented two area churches, one private school, and one community choir.

The following poem was taken from the Concert Program.

I  Heard The Bells On Christmas Day

I heard the bells on Christmas day
Their old familiar carols play,
And wild and sweet the words repeat
Of peace on earth, good will to men.

And thought how, as the day had come,
The belfries of all Christendom
Had rolled along the unbroken song
Of peace on earth, good will to men.

Till ringing, singing on its way
The world revolved from night to day,
A voice, a chime, a chant sublime
Of peace on earth, good will to men.

Then pealed the bells more loud and deep:
“God is not dead, nor doth He sleep;
The wrong shall fail, the right prevail
With peace on earth, good will to men.”