Is that Tom and Gronk about to stomp all over Heinz stadium?…..or is it Norm and Ben, trying not to get beat up in the parking lot. Either way, PATS NATION BABY

About 6 weeks ago I was visiting with my son on the phone and he mentioned that he would LOVE to see Tom Brady play before he retires.  Living in New England these last few years has been a gift with the the Patriots as the home team.  We started looking on the internet at the games scheduled for this year and what the possibilities of going to a game would be. It appeared that the New England Patriots in Pittsburgh game would be out best bet.

My son Ben lives in Ohio now, Empty next syndrome and all of that.  I haven’t seen his new apartment, or his place of employment. To be honest, I knew the game would be fun, but I just wanted to hang out with Ben.  Mini road trip, go eat some junk food, and just hang out like old times.

We bought some jerseys, our tickets, and we were going to the game.

And we are not going to be late to this game. In fact, we went two hours early, just to sit in the seats and look around; bask in the thought that we were together, father and son, at a football game. A gentleman sat next to me, looked at our jerseys, and said ”wow, you are awfully brave wearing Patriots Jerseys here in Pittsburgh”.  ”Oh no, we are going to get pummeled right here in the stadium before the game even starts”, I thought.

About 15 minutes into the game the gentlemen next to me casually mentions that his son is #87 plays for the New England Patriots. Of all the seats in Heinz Field, we end up sitting next to Gordon Gronkowski!  Are you kidding me.  It was a sweet moment reaching over to Ben and whispering who was sitting next to us.

We ended up sitting next to Rob Gronkowski (#87)’s dad.

So for the next four hours we did high fives and fist bumps with Gordon Gronkowski and his friends. Rob Gronkowski #87 and the New England Patriots did give us a lot to cheer about.

Ben asked Gordon about the boat cruise. Gordon replied, “One and done.” I have no idea what they where talking about.

Ben expressed concern about last weeks game. Dad wasn’t pleased that Rob was fined $9000. Again, I have no idea what they were talking about.

Gordon asked me if I had season tickets for the New England Patriots.:) He asked me why we came to this game in Pittsburgh. He asked me about my family, how many sons and daughters did I have. Where are they and what do they do?

I answered and I asked some questions as well.

Thank you Gordon Gronkowski for reaching out and making a great game better. 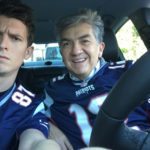 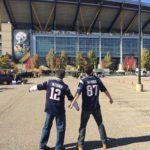 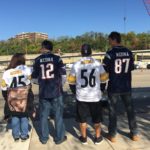 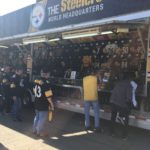 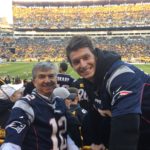 Ben & Norman Medina at the game. 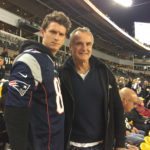