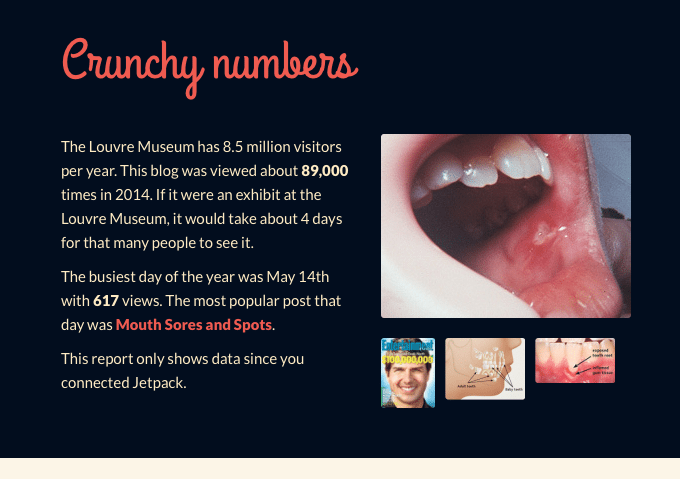 Crunchy numbers – WordPress Jetpack Yearly Report -2014. If I understand the 2014 report correctly we had about 89,000 page hits.

The Year has come to an end.  Jetpack has released our numbers for 2014!  I must admit I was hoping to hit 100,000 page hits for the year, but I guess we fell a bit short.  We do have three years of numbers to compare.  The numbers are definitely going up.

To summerize our last three years.

The concert hall at the Sydney Opera House holds 2,700 people. This blog was viewed about 47,000 times in 2013. If it were a concert at Sydney Opera House, it would take about 17 sold-out performances for that many people to see it. In 2013, there were 49 new posts, growing the total archive of this blog to 127 posts. The busiest day of the year was January 15th with 1,567 views. The most popular post that day was Tom Cruise – Asymmetrical Smile.  Taken from our 2013 report.

The Louvre Museum has 8.5 million visitors per year. This blog was viewed about 89,000 times in 2014. If it were an exhibit at the Louvre Museum, it would take about 4 days for that many people to see it. The busiest day of the year was May 14th with 617 views. The most popular post that day was Mouth Sores and Spots. Taken from our 2014 report.